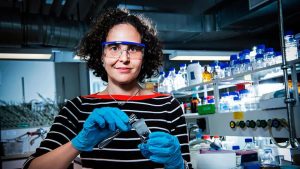 I hope all members of our TOXI community, and friends and family are safe and healthy in these extraordinary times.  The location for our fall meeting has been moved from San Francisco to the World Wide Web: https://www.acs.org/content/acs/en/meetings/national-meeting.html

We are committed to offer an excellent virtual version of our annual gathering and in the coming weeks we will be coordinating a combination of live and on demand options to share content and create opportunities for meaningful interaction online.

We are pleased to share this month’s newsletter with a focus on highlighting the amazing achievements of our 2020 keynote speaker, Cindy Burrows, and congratulations to Pete Dedon, winner of the Founders’ Award, and to Elijah Peterson, the 2020 CRT Young Investigator. We also highlight online engagement efforts of our TOXI publicity committee and invite nominations for open TOXI positions.

Dr. Cynthia J. Burrows is selected as the 2020 ACS Chemical Toxicology Division keynote speaker.. Dr. Burrows is currently a Distinguished Professor of Chemistry at the University of Utah, in addition to the Thatcher Presidential Endowed Chair of Biological Chemistry.  Dr. Burrows has authored over 200 publications, as well as a multitude of book chapters, editorials, and patent applications. One aspect of her current research investigates the relationship between oxidative nucleic acid modifications, epigenetics, and cancer. Dr. Burrows has also worked to develop nanopore sequencing technology capable of detecting various forms of DNA or RNA damage.  Visit her lab website

In 2019, Dr. Burrows was awarded the University of Utah’s Rosenblatt Prize for going above and beyond what was expected of teacher, researcher, and administrator; this is the university’s highest faculty accolade. Furthermore, her dedication to improving education and expanding the scientific community at the University of Utah have earned her the Robert W. Parry Teaching Award, the University Distinguished Teaching Award, the Linda K. Amos Award for Distinguished Service to Women, and more. Dr. Burrows has also served on a number of editorial boards and review panels. Currently, she serves as the Editor-in-Chief of Accounts of Chemical Research, and in 2019 she received the ACS Editors’ Leadership Award.  In 2009, Dr. Burrows was inducted into the American Academy of Arts and Sciences and she was elected to the National Academy of Sciences in 2014.

Pete Dedon is the 2020 winner of the Division of Chemical Toxicology Founders’ Award.

The award was established in honor of the founders of the Division of Chemical Toxicology and recognizes scientists whose work exemplifies the founders’ vision of excellence in the field of chemical toxicology. Awardees are  members of the Division of Chemical Toxicology whose scientific activities have emphasized innovative research in the general field of chemical toxicology.  The winner is chosen by a committee currently chaired by Kent Gates

Pete is currently the Underwood-Prescott Professor in the Department of Biological Engineering at MIT, Lead Principal Investigator in the Singapore-MIT Alliance for Research and Technology Antimicrobial Drug Resistance Program (SMART), a founding member of the Chulabhorn Graduate Institute in Bangkok, and a member of the MIT Center for Environmental Health Science. His research group has developed a variety of analytical and informatic platforms for discovery science in epigenetics and epitranscriptomics in infectious disease and cancer. One platform coordinates comparative genomics, SMRT sequencing and mass spectrometry to discover novel epigenetic marks, such as the recent discovery of phosphorothioate and 7-deazaguanine modifications in bacterial and bacteriophage genomes in the human microbiome. In the realm of epitranscriptomics, his team has applied systems-level analytics to discover a mechanism of translational control of cell response in eukaryotes and bacteria involving site-specific reprogramming of tRNAs and an alternative genetic code.

The winner of the Chemical Research in Toxicology Young Investigator Award for 2020 is Elijah Peterson of the National Institute of Standards and Technology.  Elijah Peterson will lead a half-day conference session as part of the ACS Division of Chemical Toxicology program at the ACS Fall National Meeting in San Francisco, California.

Elijah graduated from Case Western Reserve University in 2003 with BS and MS degrees in Civil Engineering and a BA in Psychology. He received a PhD at the University of Michigan studying the uptake and elimination behaviors of carbon nanotubes using earthworms and sediment-dwelling oligochaetes. He then received a Fulbright scholarship to do postdoctoral research at the University of Joensuu in Finland where he studied the uptake and elimination of carbon nanotubes and fullerenes in Daphnia magna. Elijah joined NIST as a National Research Council postdoctoral research fellow from 2009-2010 and then became a staff research scientist in 2010.

His research involves developing robust standard methods for assessing the potential impacts of nanomaterials on organisms and humans.  He is studying how nanomaterials impact the standard battery of toxicological assays as well as developing new tests.  Thus, a research focus in his team is to identify potential artifacts and design control experiments and other modifications to those assays to minimize artifacts and misunderstandings. In addition, he is studying the use of NIST reference materials (RMs) as positive or negative controls for standard toxicity methods to improve assay reliability and generate reference data.

An example of his research is  the development of standard methods with C. elegans for use with nanomaterials and the application of advanced microscopy techniques to improve the robustness of the assays. The sources of variability for an ISO method for C. elegans growth inhibition are being evaluated through cause & effect analysis and experimentation to identify the most critical sources of variability in the assay. He is also focused on the development of methods to accurately quantify nanomaterial concentrations in environmental matrices and organisms to enable bioaccumulation protocols and provide number-based nanoparticle concentrations.

Professors Sarah Shuck and Maureen McKeague have taken over the @acschemtox twitter feed.  You will have noticed a daily TOXI tweet, primarily on new publications.  If you’ve never seen our Tweets, look to the right. There it is, right on our website.

The nominations committee would like to call for nominations for the following positions in the Division that are up for elections:

Members are also welcome to provide nominations at the Division’s business meeting, which usually takes place in the Fall ACS National Meeting.

The Program is set.  Hopefully we will meet in San Francisco.  Below is a summary of our Program.  Full Program

Genome-wide Perspectives on the Formation, Repair, and Consequences of DNA Damage

Chemical Exposures and Impact on Health

We invite you to suggest TOXI symposia for future ACS National Meetings. Note that programming occurs well in advance of the national meeting. Currently, we have three thematic sessions in place for the 2021 meeting (August 22 – 26, 2021, in Atlanta, GA). The fourth one is still to be decided.  Send in your proposals.

The symposium proposal form is at: http://www.acschemtox.org/news-and-events/ under Symposium Proposals.

Get involved and make sure TOXI programming is of wide interest!